The Ocean Village Floating Hotel is an ambitious project in the heart of Gibraltar’s marina.  Rock Foundations (Gibraltar) was engaged to provide an effective solution to retaining the silts, sands and clays which lay above the rock on the seabed on the eastern side of the Casino Island, allowing the water depth to be increased by means of dredging to facilitate the 5 metre clearance required to accommodate the floating hotel.

The proposed location of the floating hotel, the channel between the concrete pier servicing the marina bay and eastern side of the Ocean Village island, required boreholes and a test drive to be undertaken in the area to compare against previous reports regarding the geology of the area.

A water depth of approximately 3 metres with loose sands/silts over clay which stiffens to marl above the rock exists at the site.  Both the level and the strength of the rock can vary significantly in this area rendering a purely driven solution widely unpredictable, potentially costly and unproductive. 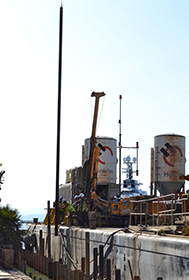 Our proposal: a retaining structure to facilitate the dredging works, a scheme which offers an alternative to driving steel sections into the rock; this also enabled a reduction on the dependency of large pontoon vessels and heavy weight plant and materials.

This solution was capable of adapting to a variety of undetermined load configurations whilst adding value through the incorporation of the piles in subsequent works required by the project.  It also allowed the continued flow of sea water between the piles to maintain water quality in the marina area. 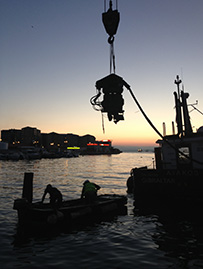 The pile was formed by pumping structural grout, tremmied through the CHS tube. Once cut to level the remaining spaces between the piles was then sealed off to the silts by driving sheet piles through the silts and into the stiff clays below. A steel matrix was then incorporated through the top section of the piles to allow the construction of a pre-cast decking system which affectively increased the road/ walk way beside the casino. In addition the same piling technique was utilised to provide a new suspended in situ concrete road to link the existing pier to the access road at the Ocean Village Marine entrance.

Top of the Rock Antenna