Rock Foundations (SL) were asked to consider an underpinning scheme which would be the least intrusive but which would provide additional support to the external columns protruding from the external terrace to the first floor of the structure.

In order to acheive this the pile positions were pre drilled through the terrace tiles using a 200mm core drill. Each position was then drilled via a 200mm auger which penetrated the soft clays founding in the stiffer clays at a depth of 8m. A steel cage was then inserted for the full length of the piles and the piles were then formed by pumping structural grout via a tremmie tube filling the entire pile. 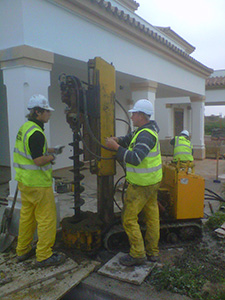 Following completion of the piling works the main contractor was able to drill and fix connector bars into the existing column bases. A steel cage would link the connector bars to the pile heads and the whole arrangement was filled with a structural concrete. 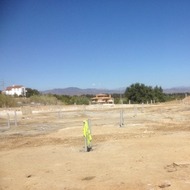